When I began this blog, I’d resolved to upload at least one post a month. I managed that for the first two months, and then went into hibernation for a good year-and-a-half till November this year when I uploaded a third post.

I had, however, out of curiosity (laced with hope, I suppose), kept up with the statistics on the blog. I found that, even over these eighteen empty months, there had been at least one or two visitors a day and, curiously, most of these ‘faithfuls’ were from Brazil!

While I’m happy that my blog draws visitors from Brazil, I have a faint suspicion that this may not always be because of the content. Whatever else the reasons could be (including misdirection), I hope they’re on this side of legal!

And so – the idea for this post! Since folks from Brazil are visiting (or stumbling upon) this blog, I’ll take the opportunity to do my bit to strengthen Brazil-India ties!

Ola Brasil !! I’m sure there are things about India that you love, but you can tell us about them. From our side – How do we love thee? Let us count some ways! (Thanks, Elizabeth Browning!)

I’ll leave it to others to talk about economics, science and technology, BRICS, Embraer, and the like. I’d like to talk of a few things we have in common and a few joys, things that would appeal to the mildly inquisitive – whether Brazilian or Indian!

Most of my generation, particularly in South India, grew up believing that our beloved ‘filter coffee’ was the sixth element, and that it was as uniquely Indian as idlis. Chikmagulur was considered the holiest area on earth, since Baba Budan hailed from there, and the Indian Coffee Board was headquartered there. Imagine our surprise when we learnt that, across on the other side of the world, Brazil was where 80% of the world’s coffee was grown. We had a big brother (sister)! With coffee as common language, we’d never be foreigners if we ever went there! And that surprise turned to a happy sense of bonding when we learnt that our ‘coffees’ had somewhat similar parentage:

Oh! The lengths that true patriots go to, for their countries!

The historical difference, of course, is that the Portuguese in Brazil (the colony) and the indigenous folk formed a large nation of their own, wresting independence from Portugal, while the Portuguese in India, though they sowed their oats and left their names at various places in South India and on the West Coast, were overwhelmed by the English. They were allowed that one small colony, Goa, which was later ‘liberated’ and became part of the Indian union in 1961 (though Portugal gave up her claim to the colony only in 1974). However, the Portuguese heritage remains (and is enjoyed and valued) and, small though Goa may be, Goans have played a significant role in the building of modern India in very many ways.

In India, it’s a game everyone could afford to play, (if only they had access to playing space). In certain Indian states (Goa being one) football is almost a religion. And for those of us who follow the game with any degree of interest, the Brazilians have always been key figures. Only one, however, owns our hearts.

For a decade and a half between the 1960s and 70s, all a movie hall owner had to do, to ensure a full house, was to run a documentary including even a few minutes of a match involving PELE, after the main feature had been shown!

We grew to love this magician who, without any apparent effort, wove his way through the opposition like a knife through blancmange, who, with what seemed a mere touch of his foot, had the ball whip into the net around (sometimes through) outstretched goalkeepers, and who, (shockingly, by modern-day standards) remained as humble in his frequent victories as he did in his occasional defeats.

Words would fail me were I to attempt more description. The following link has a video that presents the highlights of the 1958 World Cup final that the 17 year old Pele won for Brazil. I think you’ll agree that it says it all!

Today, the younger football fans in India rave about Ronaldo, Neymar, Ronaldinho and Kaka, among others. For me however, and, I’m sure, for many others, Pele is truly The King, of all football!

And, though last, certainly not least (especially for me) –

For many of us in the early 60s, The Shadows (who played guitar-based instrumentals) were the ones who introduced us to electric-guitar versions of famous tunes from around the world.

One of their tunes, called The Girl from Ipanema, caught my fancy. As my interest in music grew, I learnt that the original was composed by a Brazilian, Antonio Carlos Jobim, in 1962. The original Portuguese lyrics were by Vinicius de Moraes. A 1964 version of this song, sung in English by another Brazilian, Astrud Gilberto, took the world (at least, those in the world who listened to jazz) by storm. The song was awarded a Grammy in 1965. 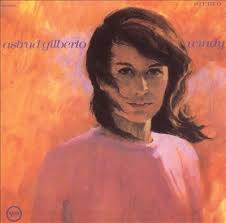 Astrud (from the jacket of an album)

Here’s a link to the Astrud Gilberto recording:

And here’s an instrumental version on acoustic guitar, by Pat Metheny:

[[- The story behind this wonderful piece of music is equally wonderful. It’s like a fairy tale – 2 friends who see a pretty girl go by, are inspired to create a piece of music in her honour! The music becomes immortal and along the way brings recognition to the pretty girl who goes on to become a goodwill ambassador for Brazil! It’s worth reading the complete story. Here’s where you’ll find it:

Here’s Jobim himself (with a different piece, though):

Just as the jazz world was recovering from the impact of Astrud’s voice, came, close on her heels, another Brazilian, Flora Purim, who has lent her voice not only to jazz, but also to fusion and rock! (Flora’s husband, Airto Moreira, also Brazilian, is a jazz and fusion percussionist who has played with leading instrumentalists and bands). I first heard Flora Purim sing (and Airto play) on the eponymous “Return to Forever”, the seminal album by Chick Corea and Return to Forever. They generated a truly unique sound. So unique in fact, that you don’t find too many other bands and singers performing ‘covers’ of RTF songs. Flora Purim’s 72 now, and even though her performances in recent years have been few and far between, she remains a key figure on the jazz and fusion scene.

and on an ethereal piece with Chick Corea and Airto Moreira:

So, is there a message in this post, dear reader? One wasn’t really intended, but perhaps we could get to this:

People tell us that the world is getting smaller, thanks to global interaction and the internet. What should ‘smaller’ mean? That the world’s getting more cramped with not enough room for all of us? Or that opportunities for people to people contact are increasing? I think it should be the second. If the second is the case, then we shouldn’t be looking at it only as ‘the world getting smaller’. It should really be perceived the other way around too – global interaction and the internet can enable each of us to expand our own world, to expose ourselves not only to political, economic and academic thought, but also to culture and tradition, to gain perspective and understanding.

Only when we get there can we move from thinking “Our nation – Our world” to “Our nations – One world”.